From 2003 to 2019, TEDX produced and shared scientific evidence of endocrine disruption with nonprofit organizations, government agencies, and the public. Although we are no longer operating, our website resources will remain available.
TOP

An Exploratory Study of Air Quality near Natural Gas Operations

This paper was peer-reviewed and accepted for publication by Human and Ecological Risk Assessment: An International Journal (November 9, 2012).

Abstract: This exploratory study was designed to assess air quality in a rural western Colorado area where residences and gas wells co-exist. Sampling was conducted before, during, and after drilling and hydraulic fracturing of a new natural gas well pad. Weekly air sampling for 1 year revealed that the number of non-methane hydrocarbons (NMHCs) and their concentrations were highest during the initial drilling phase and did not increase during hydraulic fracturing in this closed-loop system. Methylene chloride, a toxic solvent not reported in products used in drilling or hydraulic fracturing, was detected 73% of the time; several times in high concentrations. A literature search of the health effects of the NMHCs revealed that many had multiple health effects, including 30 that affect the endocrine system, which is susceptible to chemical impacts at very low concentrations, far less than government safety standards. Selected polycyclic aromatic hydrocarbons (PAHs) were at concentrations greater than those at which prenatally exposed children in urban studies had lower developmental and IQ scores. The human and environmental health impacts of the NMHCs, which are ozone precursors, should be examined further given that the natural gas industry is now operating in close proximity to human residences and public lands. 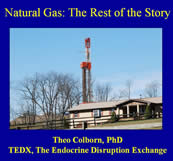 Natural Gas: The Rest of the Story

In March, 2012, Theo Colborn spoke to an audience in western Colorado on the hazards posed to human and environmental health by air pollution from natural gas operations.